Hope and a Future in America - Dr. Peter Wyns 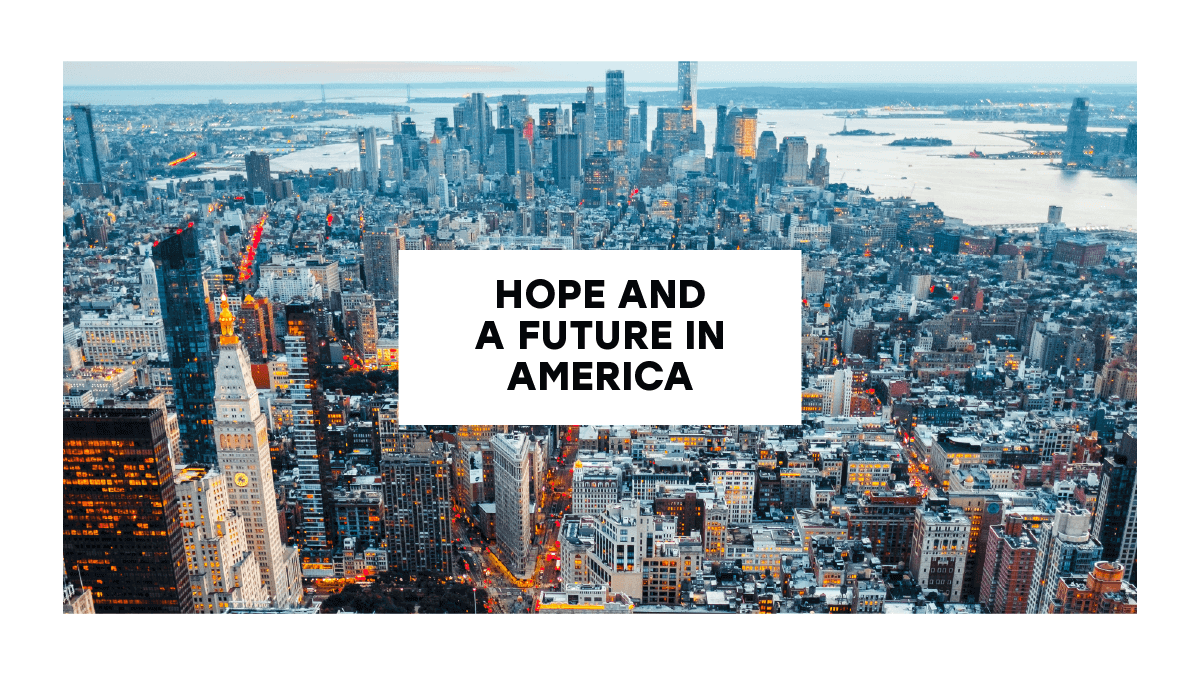 We are heading for the next US presidential election. Hilary Clinton and Donald Trump have challenged each other and it will be the most important election, for the USA, in my lifetime. So much is at stake and Christians should vote for the one whose policies best line up with the morals of the Bible. Besides the uncertainty of this election, Gay rights activists have been pressuring our governments to allow transgendered people to use any bathroom they choose. Violent confrontations seem to be constantly erupting between protesters and local police officers. Many people are confused and discouraged, wondering if there is hope and a future for the United States. They are concerned that the nation has slid so far from its Biblical foundations that it might never recover. This is not the end. The    Bible says, ““I know the plans I have for you,”  declares the Lord, “plans to prosper you and not to harm you, plans to give you hope and a future.”” Jer. 29:11

Who this Scripture is For

The context of the above mentioned verse is a promise from God that comes through the prophet Jeremiah. Most Christians who read it seem to take it out of context. The prophecy for prosperity, hope and a future was not, first of all, given to us, but to the captive Jews in Babylon. We read, “This is the text of the letter that the prophet Jeremiah sent from Jerusalem to the surviving elders among the exiles … and all the other people Nebuchadnezzar had carried into exile from Jerusalem to Babylon.” Jer. 29;1

The Jews were captured and brought to Babylon as slaves. This happened as a judgment because of the sins and crimes toward the weak and defenseless in the nation. God defends the disadvantaged and judgment always comes to those who hurt the weak (See Ezekiel chapter 22). In verse ten we read that their captivity would last for seventy years.

For many, living in America, feels like being exiled in Babylon. People cannot pray in public schools and crosses, Bible texts and Christian symbols are removed from the public square. Witchcraft and perversions are celebrated for entertainment and the sanctity of the unborn and marriage are sacrificed on the altars of lust and convenience. Although the nation began with Judeo-Christian freedoms, many feel that they are under siege in an idolatrous land; they are prisoners of paganism in their own country.

The Prophecy is For America

The Lord promised, prosperity, hope and a future to enslaved Israel and I am glad to report that these words apply for Christians in the United States of America as well. Although the Bible tells us there is a difference of roles that Jews and Gentiles play in the purposes of God, we are all one new man in Christ. Gentile Christians are not Israel but they have been grafted into the family of God; they are sons of Abraham, and they receive the same nourishing sap that flows in the roots of the Jewish tree. (See Romans 11:17,24)

Like with a husband and wife, although they are different, Jews and Gentiles are one in Christ and each receives the full measure of blessings from the Lord. The Gentile Christians receive the same nourishing sap (the life, salvation, and full blessings of the Holy Spirit) as Jews in Christ receive. Therefore the promises for prosperity, hope and a future apply to the Christians of America, even though they too may feel like they are living in a symbolic Babylon. God loves His family.

Soon, revival will come to the USA. Wars, earthquakes and famines are not the end, they are just the beginning of birth pains. (See Matthew 24:6-8)  Christians are called to live the abundant life of Christ, even if they live in Babylon. God instructed Israel to do seven things while they lived in exile. They are absolutely amazing. These seven instructions apply to us today. Here is what we read in Jeremiah “This is what the Lord Almighty. The God of Israel, says to all those I carried into exile from Jerusalem to Babylon: Build houses and settle down; plant gardens and eat what they produce. Marry and have sons and daughters; find wives for your sons and give your daughters in marriage, so that they too may have sons and daughters. Increase in number there; do not decrease. Also, seek the peace and prosperity of the city to which I have carried you into exile. Pray to the Lord for it, because if it prospers, you too will prosper.” Jer. 29:4-7

Here are the seven things God told the Israelites to do while they were in Babylon. We in America should do the same.

1. Build homes and settle down

2. Plant gardens and eat from it

4. Have children and grandchildren

5. Seek peace for the city you live in

6. Seek prosperity for that city

7. Pray for the city you live in

Even as judgment hangs over the nation, God has plans for redemption and revival. As believers; you are called to be a witness in a dark place. “Do everything without complaining or arguing, so that you may become blameless and pure, children of God without fault in a crooked and depraved generation, in which you shine like stars in the universe.” Phi. 2:14-15

Finally, the Lord promises to bring  Israel out of exile and back to their land. (See Jeremiah 29:10,14) He will do the same for us. One day the whole earth will be filled with the glory of the Lord and we will reign with Christ. He will bring us back to Eden. “This land that was laid waste has become like the garden of Eden.” Ez. 36:35

Based on God’s word, here are 4 guidelines for righteous living in Babylon.

We have hope and a future. God is at work in America. Shine brightly, settle down, raise godly children, pray for the city, and win the world for Christ.