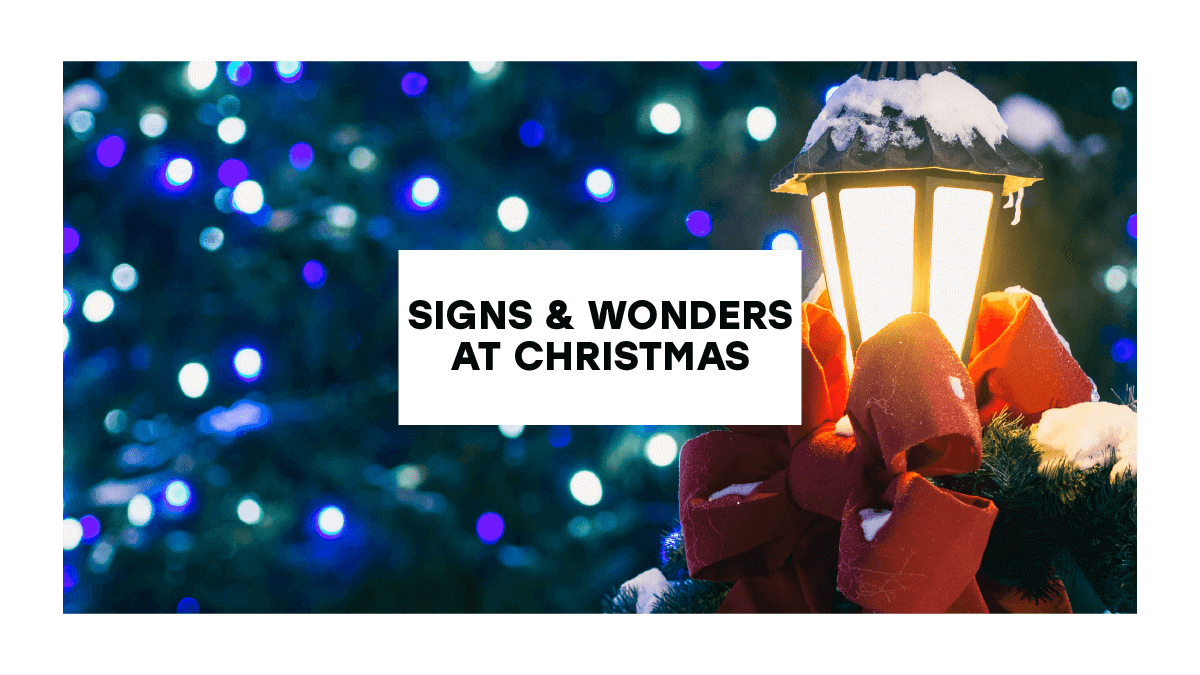 All of us need signs from God. A personal sign tells us that God is watching over us. We don’t need signs to tell us how to behave because those details are covered in the scriptures. We need signs, however, for decision making, assignments, direction and destiny. The larger the matter, the more important it is to have a sign from God. When we have important decisions to make, we ask and God gives us a sign. On other occasions, like in the Christmas story, God gives amazing signs to inform us of His plans.

A sign and a wonder from God is a supernatural or natural phenomenon that God gives us to show us His will. It can be a scripture that is so amazing that when we come upon it, we find that it directly applies to our immediate situation in a personal way. A sign from God can be a phenomenon in the weather or a meeting of a special person or angel. It can come as a prophecy, a word in a dream or even a supernatural anomaly that defies logic or the laws of nature. There are no specific rules to limit how God may give you a sign and a wonder or in what form it will come, but when it comes it will absolutely amaze you and it will change your life.

Let us study the signs and wonders that God gave us for Christmas. He presented so many signs to affirm the coming of His Son that no person of genuine truth would be able to deny that Jesus is the Christ, the Son of the Living God.

First of all, in the Old Testament scriptures, we have hundreds of prophetic verses that point to the coming of Christ and what He will do. All of those verses are amazing signs from God. Here is one that is so specific to our theme.

Therefore the Lord Himself will give you a sign:  behold, the virgin shall conceive and bear a Son, and you shall call His name Immanuel.” Isa. 7:14

It was a miracle and a supernatural phenomena, that has only happened once in the history of humanity; that a virgin has conceived and given birth. That was definitely a supernatural sign from God.

The first sign that God gave at the time of Christ’s coming was a star in the heavens. The wise men said:

“Where is the one who has been born king of the Jews? We saw His star in the east and have come to  worship Him.” Mt. 2:2

This sign was likely a natural phenomenon, however, it moved in an unusual manner and stopped over the place where the child was. It might have been supernatural. The magi, obviously had a prophetic word from God and when they saw the star in the sky they knew it was the sign from God they were looking for. The sign motivated them, gave them faith to endure the journey and gave them the direction they needed. All that the star was designed to do for them, came to pass. If you receive a sign from God, it will serve its purpose and prove itself in your life.

The visitation of Gabriel the angel to Mary was an amazing sign from God. He announced the coming pregnancy and the importance of the child that Mary would deliver. Without this sign from God, Mary would have been really confused when she eventually discovered that she was pregnant. If an angel came and talked with you, you would definitely see the event as a powerful sign from God.

Joseph was also blessed with a  wonderful sign from God. He had 4 dreams regarding the Christ child. The first one came while he was engaged to be married to Mary. She had already told him that she was pregnant and he was trying to figure out a godly way of handling the situation. He was planning to end his engagement with her and still help her with her future. It was a very difficult time until he got a sign from God. An angel appeared to him in a dream and told him not to be afraid to take Mary as his wife. The angel explained to Joseph that Mary’s baby was conceived by the Holy Spirit and was indeed the Christ child. The sign from God  settled the matter for Joseph and gave him the vision he needed to realize that both he and Mary had been chosen by God for a most amazing task. And furthermore,  because of this sign from God,    Joseph fulfilled everything that   Jesus needed from his earthly father. God has given me many signs through dreams. Have you received a sign from God in this way? Would you recognize a sign from God if the Lord gave it to you in a dream?

The shepherds and their angelic visitation are such a glorious part of the Christmas story. Imagine a   sudden flurry of lights filling the sky in front of you. It must have been such an amazing sight, yet no one else in the region saw it. Just the appearance of a multitude of angels was a powerful sign from God, but what they said was so direct that the shepherds immediately knew their assignment. They also realized that they had become an intricate part of the eternal plans of God.

“Today in the town of David a    Savior has been born to you; he is Christ the Lord. This will be a sign to you: You will find a baby wrapped in cloths and lying in a manger.” Lk. 2:12

The angels gave the shepherds 3 signs. 1. That the Christ child would be born in Bethlehem. This was prophesied in the scriptures and is found in Micah 5 verse 2. Bethlehem means house of bread. So even the town is a sign, for Jesus is the bread that came down from heaven.

2. The second sign given to the shepherds was that the Christ child would be wrapped in cloths. This was not uncommon, however, the wrappings of Christ, even as a babe, are a powerful sign. They speak of the covering of salvation that Christ extends to all who call upon His name.

3. The third sign given to the shepherds was that Jesus would be lying in a manger. Now that was unusual. It gave the shepherds a clue about where to look and it became a sign to the whole world of Christ’s humble beginnings. Thousands of sermons have been given on the significance of the manger.

Finally, we discover that Christ Himself was given to the world as a sign from God. Simeon, received baby Jesus and prophesied over Him in the temple. He said:

Before that, he said about Jesus:

“A light for revelation to the  Gentiles and for the glory to your people Israel.” Lk. 2:32

Jesus is a sign from God and He is for the Jews and the Gentiles.

Christmas is here! I love it! My family will not be with us this year because they will be with their in-laws. Still, I love it. My eyes look to the skies with wonder and anticipation. I look for God’s special signs to me. He always speaks, and each season is filled with His glory, even during the worst of times. I encourage you to press into God. Do your best to walk with the Lord over the holidays, but do more than that. Expect Him to speak to you. Look for signs and wonders and touch the glory of the Lord.