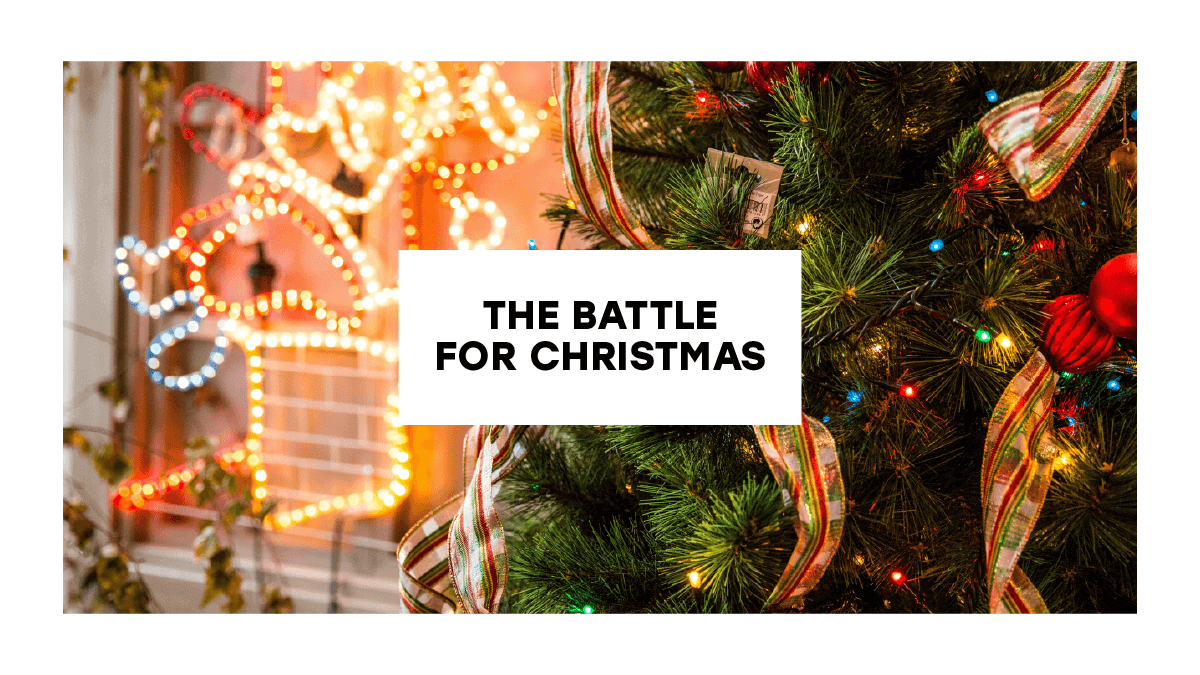 I love the nostalgia, chestnuts roasting on an open fire, children laughing, carols, lights and decorations, the thrill of worshiping Jesus, the presents, the Christmas productions, and the great food. I even like Santa Clause. I love it all, and the more parties and merriment, the better. It is our culture, our way of life, and an attempt to get the entire nation focused on Jesus, the Savior of the world. This may be the only time that some folks ever hear a part of the gospel message. I wish we had no enemy, but we do and he does not sleep or rest from his mission to kill, steal and destroy. The battle is for godliness and goodness, but who wants a battle at Christmas? Satan cannot destroy faith in America quickly, so he tries to take ground, one inch at a time. Don’t let him have any.

Christians in America have not kept up with the battle for the high ground of the nation. Many church leaders and church members have relegated the expression of their faith to their church buildings while the devil has stolen main street USA. This is a global catastrophe, and it is worse in other nations around the world. Europe, which centuries ago championed the mission of Christ, has become agnostic and even aggressively antagonistic toward the Christian message.

Universities like Yale and Harvard were founded as institutions for Christ but slowly the government of those institutions shifted to become more liberal. They intentionally boycotted faith-filled Christianity and led each new generation in a strategic ideology of atheism. That has been the devil’s plan; he trains the intellectual leaders of the land to have an anti-Christ mindset. Then they are put in places of influence and authority to negatively change America.

From the universities they go into politics, law, Hollywood and the news media. They capture the airwaves, the newspapers, and control the message that comes over the sliver screen, computers, and smartphones.  The nation is constantly fed the words of darkness a spoonful at a time. This is no different than the propaganda machines used by evil dictators of abusive rouge nations. So the younger the generation, the more separated they are from the ethos of the Bible and the foundations of Christianity.

We are at war and the battle over Christmas is just the tip of the iceberg. Most of the battle is under the surface, invisible to the average person. The strategy of the devil must be exposed. We are not ignorant of his devises but most of the people, even in the Church are unaware of the arrow that flies at noon day. This dark movement does not plan to stop at a place of equality for all ideologies. It will not stop until the Church of Christ is completely annihilated in America. People of God, I call upon you to stop giving up the land and to fight the good fight for your grandchildren. Start with the battle for Christmas. You may not think it is that important but every inch of ground is connected to vast acres of ground . We have lost too many inches already. We have lost acres.

A New Army is Rising

All is not lost; it is wake-up time in America. Slowly, the Church is waking up. Many of the Christians who are leading the charge for godliness and Christianity in America are not prominent in the traditional Church meeting genre. They love the Lord, but their main work is outside the walls of the church.

That is not to say that Church meetings are unimportant. They are vital and they need to become more anointed and more powerful. A new breed is rinsing, however, that recognizes the need to get the gospel out where all can see it. These warriors are Christian film makers, born again politicians and Christ-focused university professors. They are Christian athletes and celebrities who see their goal as more than making money. They are called to influence a nation for Christ. The enemy tries to sideline them from leading institutions and boycott them from having influence at the pinnacles of power. When Christian voices are raised beyond the four walls of the Church, the devil cringes. It is okay for Christians to exist within the worshipful walls of the church but Satan would like to keep them there, unseen and ineffective over the nation.

While most of the Church was sleeping, however, God has been stirring the flames for revival. He is raising an army and it is powerful. People of influence are getting saved and the Church is being emboldened.

Ministers like the late Jerry Falwell helped turn the focus back to main street USA and many more have seen the call to fight this fight. Even President Donald Trump has been used to help embolden the Church. We are witnessing a movement designed by God to reclaim the USA for Christ.

The Battle for Christmas

Let this Christmas be a different kind of Christmas. See it as a holy battle ground. A new season to boldly proclaim the glories of Jesus Christ, who is King of Kings and Lord of lords. Let His righteousness, peace and joy be spoken over the land. Let the love of Christ be seen and the message of salvation be everywhere.

Jesus calls for the souls of humanity, but that is not His only mandate. He birthed this nation and it belongs to Him. He will not take it by force until He returns in person, but through His people, He will rule the USA with grace, influence, and authority.

Shakespeare said, “All the world’s a stage, And all the men and women merely players.”

What part should you play in this Christmas season production?

Here are seven things that I       encourage you to do:

1. Enjoy the season to its fullest, being sure to make Jesus the center and the ultimate reason for the season.

2. Decorate the inside and outside of your house and get involved with every expression of Christmas that your church and community are promoting.

3. Invite friends and neighbors to church and to your house for a Christmas party and/or a meal sometime this December.

4. Let your house be filled with Christmas carols and plan to go caroling, and/or help serve the poor in some way.

5. Focus on the kids. Take time to share the Christmas story and your personal faith testimony with them. Teach them to pray.

6. Send loving cards and gifts to as many people as possible letting them know how thankful you are for Jesus our Savior.

7. Pray for those in authority in the land. Pray for your family, your friends, and for those the Lord wants you to reach.

Fight the battle for Christmas and set a pattern for the rest of the year. Be part of the fighting church; active, vibrant and alive in America. Take back the land.