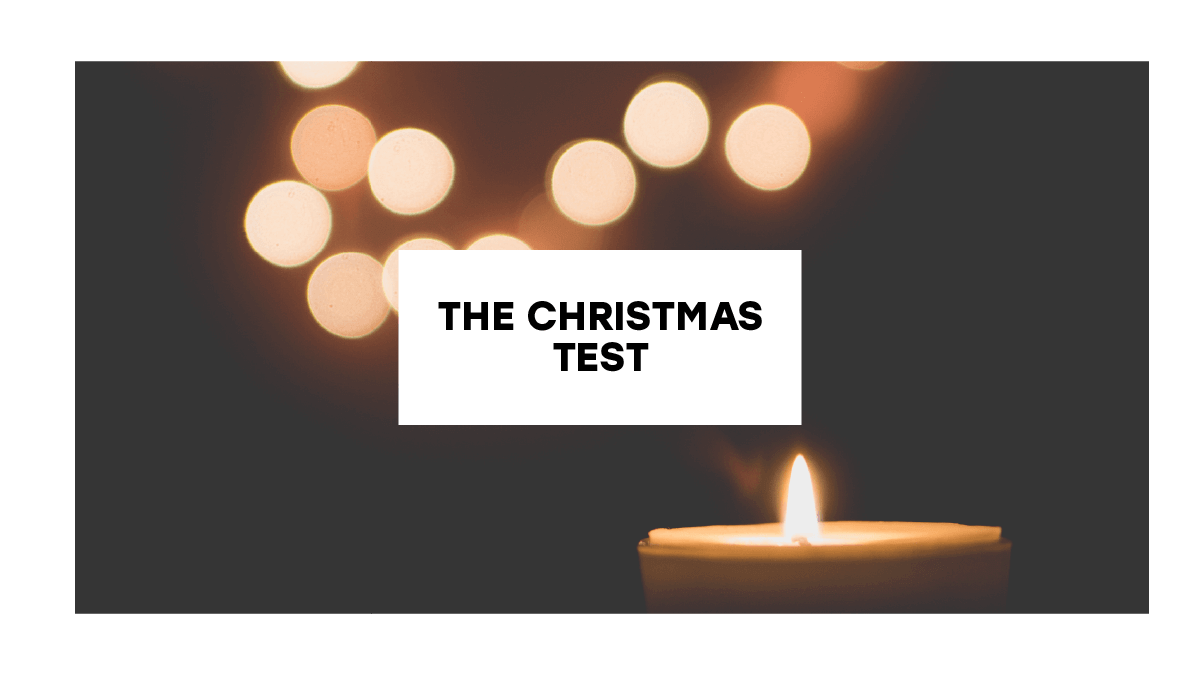 Shortly after the baby was born, Mary and Joseph took Jesus to the temple to dedicate Him. An old man named Simeon was there anticipating a supernatural moment. God had promised Him that he would not die until he had seen the Lord’s salvation. When he saw the Christ child, he knew that the prophecy was being fulfilled. The Holy Spirit came on him, he took the baby in his arms and prophesied. “This child is destined to cause the falling and rising of many in Israel, and to be a sign that will be spoken against, so that the thoughts of many heart will be revealed.” Lk. 2:34-35 Whenever we are introduced to the Savior of the world, our response is a test. It will reveal who we are and what is in our heart. Our response determines whether we rise or fall.

Mary was the first to be tested with the introduction of the Christ child. Gabriel the angel came to her and announced that she would be with child by a supernatural act of the Holy Spirit. He also told her that the baby would be the Son of God. At first Mary was troubled by the angel’s words, but she passed the test and said, “I am the Lord’s servant”… “May it be to me as you have said.” Lk. 1:38

The next person to experience the Christmas test was Joseph. He was engaged to be married to Mary. Before they came together Joseph discovered that Mary was pregnant. He was a righteous man and did not want to expose her to public disgrace, so he planned to break off the engagement quietly.

Before putting his plan in motion, Joseph was visited by an angel and he was tested. It happened in a dream. He could have dismissed the dream as just circumstantial, instead, he heard with the ears of faith. He believed the word of the angel and passed the test.

At some point, you have already, or you will in the future, be given a Christmas test. In a manner that you are not expecting, you will be introduced to the Christ child. Your response will be one of faith or skepticism. Although you may not see the results immediately, your faith will cause you to rise, however, if you demonstrate a lack of faith, you to fall back.

The Christmas test is one that you will face throughout your life, for it is a lifetime of faith that God is looking for. In school, children are tested from the first grade until the last year of university. The last tests are much more challenging than those at the beginning. You have learned more, and more is expected of you. When the school years are over, the learning and testing continues. In every season of life you must make decisions and those decisions are tests; they have a profound influence on your future.

After you pass the first test of faith, the Lord will teach you more and more will be expected of you. The tests reveal your heart and determine the level of your fellowship and purpose with the Lord. If you pull back you fall short of your prophetic calling. It you press on in faith and continue to pass the tests, the Lord reveals more of your prophetic mission and blesses you with His grace and favor. Jesus is a sign given to us all. When we are introduced to Him, the motive of our hearts is revealed and we rise or fall by our response.

The Testing of Joseph

Joseph was chosen by God to be the care-giver and father of Jesus. He was, however, given choices and he was tested. We thank God that    Joseph continually passed the tests.

His first test was to treat Mary with dignity and respect even though he thought she had been unfaithful to him. No doubt, he was deeply wounded and went to God in prayer to cast his heavy burden on Him. It was there that he found grace to forgive Mary and move forward. Although he was deeply disappointed, Joseph found peace and that is why he did not become vindictive toward Mary. Instead he endeavored to protect her. As mentioned earlier, he looked for a way to break off his engagement quietly. Perhaps he would relocate her to another town where she would not suffer humiliation. That was Joseph’s first test and he passed with flying colors.

The second test came to Joseph in the night. An angel visited Joseph in his dream. It was not the kind of dream where you are left wondering what it was about. The angel spoke clearly. He told Joseph everything he needed to know about Mary’s pregnancy. He said that the child was from God and that Joseph should not be afraid to take Mary as his wife. He even told Joseph that he should name the baby Jesus and that this child would save people from their sins. Joseph could have dismissed the dream, but he had faith. He believed the dream was from God and that the information given by the angel was true. This was a huge test because nothing like this had ever happened in history before. If you were Joseph would you have believed that your dream was from God and not just a sleep phenomena that could happen to anyone who had experienced such a traumatic day?

The third test that Joseph passed involved obedience. Faith without works is dead, so there must be an obedient action as well as a realization that God spoke. We read, “When Joseph woke up, he did what the angel of the Lord had commanded him and took Mary home as his wife. But he had no union with her until she gave birth to a son. And he gave him the name Jesus.” Mt. 1:24-25

Suddenly, Joseph was catapulted from being just a righteous man of God to being center stage in the greatest action that God had ever presented to humanity. Because     Joseph continued to pass the faith tests, he fulfilled his prophetic destiny and became the famous father of the Christ child. What a blessing – what an amazing honor.

A Christmas Test Reveals the Best

The tests of God are not given to humiliate us, but to include us in His eternal plans and to lead us into a supernatural life.

I encourage you to draw close to the Holy Spirit this Christmas season. Ask the Lord for fresh revelation and new opportunities to obey Him. Every God-sent test is for your benefit. It is designed to produce a powerful testimony. You will overcome the devil by the blood of the Lamb and the power of those testimonies.

Jesus came to earth for the rising and falling of many in Israel. This also applies to people of every other nation. If you understand, you will be grateful that you have been counted worthy to be tested. God will lead you, so that in every situation you will hear from Him, trust Him, and obey Him. It is Christmas time and you should expect a Christmas test. Be joyful, thankful, and be excited.