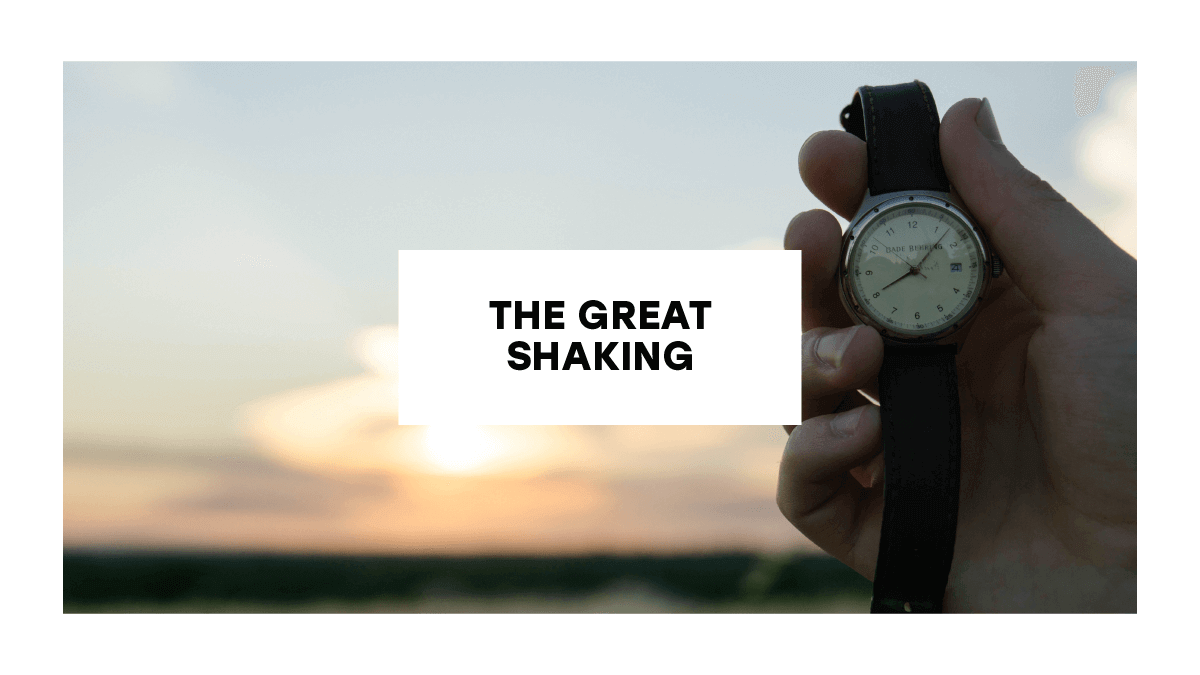 I have discovered five major ‘signs of the times’ that are highlighted in scripture and evident in the world today. These signs tell us that we are in the last days and the great tribulation looms large before us. Israel’s amazing rebirth and progressive development is, by far, the most obvious sign. Another powerful sign of the end of the age is the great shaking. Many Christians look to a single event or a sensational moment in time to find signs of the times, but Biblical indicators point to seasons and years in the fulfillment of end-time prophecy. God spoke to prophets like Abraham and Daniel about the future. These words were fulfilled over a period of hundreds and even thousands of years. For example, four hundred years in Egypt were prophesied before the ‘Exodus’ and Daniel was told of things that, thousands of years later, have still not come to pass, yet they are right on track. Daniel spoke of a great shaking, as did Haggai, and the writer of Hebrews. We read, “Once more I will shake not only the earth but also the heavens.” … so that what cannot be shaken may remain. Therefore, since we are receiving a kingdom that cannot be shaken, let us be thankful and so worship God acceptably.” Heb. 12:26-28

Signs of the Times

When powerful things happen in our lifetime that were prophesied in the Bible, we call them ‘signs of the times’. These prophecies tell us we are in the last days and urge us to get ready for what is coming. They enable us to partner with God for His amazing purpose. Three important things happen at the end of the age; 1. The destruction of evil, 2. The great harvest of souls, and 3. The return of the Lord as He brings the fullness of His kingdom to earth.

Matthew points to the great revival when he writes, “The harvest is the end of the age.” Mt. 13:39

The great shaking tests all things and only God’s kingdom will remain. Included in the ‘great shaking’ prophecy we are warned not to refuse Him who speaks from heaven. We are told to be thankful and to worship God with reverence and awe for God is a consuming fire – Heb. 12:25-29.

A Century of End-Time Shaking

The catastrophic shakings of the last century changed the world forever. WWI brought warfare on a global scale (1914-1918). It shook the nations to their core and ended powerful dynasties that had lasted for hundreds and even thousands of years. The Russian, German, Austro-Hungarian, the Ottoman Empires, and even the amazing Chinese empire all came crashing down.

Fifteen million people were killed in WWI and, for the first time, poisonous gas was used as a weapon of mass destruction. England, France, and Germany lost their economic leadership in the world and the United States was transformed into the largest military power on earth.

Please note that the famous Welsh revival of 1904 came just ten years before WWI. More than 100,000 people came to Christ, mostly in Europe, and that is where WWI was fought. It seems that God prepared His people and gave the earth an opportunity for a kingdom of God shaking. Most people, however, in Europe and Russia, that had previously been Christian, refused Him who spoke from heaven. I am confident we will see revivals in America and beyond in the years just before WWIII. That war, at the start of the Great Tribulation, will usher in the most severe shakings ever known to man.

World War II was a continuation of WWI. Just 21 years after WWI ended, WWII began. Eighty million people died in WWII and the remaining empires were shaken and lost their global power throughout the world. The    British, Dutch, Spanish, and French Empires were decimated. Due to the shakings of WWI and II, Communism expanded to cover a third of the world’s population, releasing another blood bath and shaking the nations again. Finally, Communism itself was shaken and ruined. During this time the Arab nations of the Middle-east were reestablished. And then, in 1948, the most significant sign of the nations appeared; Israel was reborn and the world moved a huge step closer to the fulfillment of the great shaking. For more than 100 years, the great shaking has been unfolding. This means that we can expect more of God’s kingdom to emerge, for everything is shaken so that only the things of God’s Kingdom will remain. This is unstoppable.

“So that what cannot be shaken may remain. Therefore, since we are receiving a kingdom that cannot be shaken, let us be thankful and so worship God acceptably with reverence and awe, for our “God is a consuming fire.” Heb. 12:26-28

The shakings of God are all-consuming but the result of the shaking is clear; it will bring forth the kingdom of God. This truth helps disciples know what to do. We must invest in the unshakable matters and life of the kingdom. We should, therefore, study to discover what the kingdom of God is all about and then press in and focus on those things. Jesus said it like this,

“Seek first his kingdom and his righteousness, and all these things will be given to you as well.” Mt. 6:33

Here are 5 basic things about the kingdom of God that we should seek first.

1. The King of the kingdom

2. The government of the kingdom

3. The righteousness of the kingdom

4. The peace of the kingdom

5. The joy of the kingdom

The King of the Kingdom

Jesus is the king. Our first allegiance is to Him. He is worthy of honor and worship. He is the Creator, the Savior of the world, and the King of Kings. Because of Him we live and move and have our being. He is the beginning and the end of all things and no one comes to God the Father except through Him. We should love, worship, honor, and obey Jesus. He is unshakable.

The Government of the Kingdom

We should not receive King Jesus but refuse His government. When Jesus rose and ascended on high, He set a new system of government in place. He released apostles, prophets, evangelists, pastors and teachers to equip, and govern His church. We must find these leaders and come under their government. This can be difficult but we will not have kingdom without then.

Once you have the King and His government, you should focus on what kind of person you should be. Righteousness, peace, and joy should describe your life. First comes righteousness. Without righteousness you will not have lasting peace or joy. Holiness through Christ is a life that does not embrace sin. This is essential for every believer. Then, you should let the peace of Christ rule in your heart and mind. Learn to cast all your cares on Him; put your faith in Jesus and live in His peace. Thirdly, be full of joy. This comes only if you have righteousness and peace. It comes as you fellowship with His people and serve Jesus and His people with a thankful heart. Trust Him and your joy will be full. The first thing the devil will try to take from you is your joy, after that – your peace, and finally your righteousness. Everything that is not of God’s kingdom will be shaken but the things of the kingdom are unshakable. Therefore, don’t be afraid, rather, seek His kingdom.